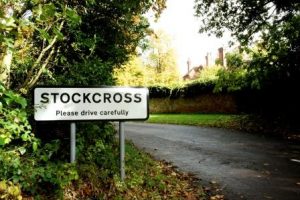 Stockcross is an attractive small village originally developed by the Sutton family in the late 19th century as a model village.

From the M4 and the north
From the M4, Junction 13 (or A34 from Oxford) follow signs for Southampton/Winchester (A34). On the A34 turn off at the junction signposted Newbury, Hungerford (Donnington, Speen) and take the second exit at the roundabout, then at the second roundabout take the second exit onto the B4000.
From the A34 and the south
From the A34 (Winchester and Southampton), follow signs for Oxford (A34). Ignoring the first two junctions signposted Newbury, turn off at the third junction signposted A4 Newbury, Hungerford (Donnington, Speen) and take the third exit at the roundabout onto the B4000.

The No 4 bus that runs between Newbury & Lambourn stops at Stockcross. It operates during the day Mon – Sat. Follow the link for the current timetable www.newburyanddistrict.co.uk/indexhtml

To Newbury station. There is a taxi rank at Newbury. Stockcross is approximately 10 minutes drive from the Station.